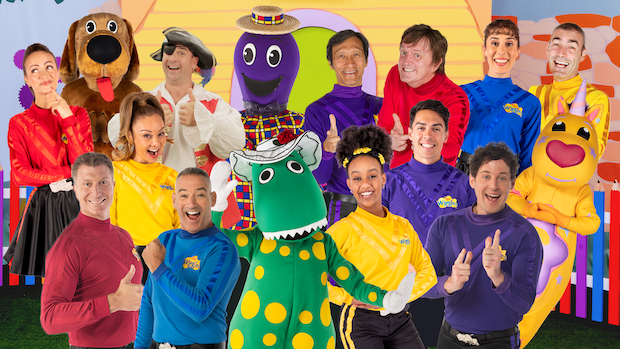 The Wiggles hot potatoed their way to the top of the ARIA Albums Chart on Friday – marking the first-ever chart-topping album for the group since its formation in 1991.

Announced last December, the two-disc ReWiggled package includes collabs with some homegrown favourites on side one, and versions of hits originally performed by AC/DC, Queen, Rihanna, James Brown, The Chats, Fatboy Slim, and many more, on side two.

It marks the second history-making moment for the children’s group this year.

In January, The Wiggles landed the top spot on triple j’s annual Hottest 100 countdown with their cover of Tame Impala’s ‘Elephant’. It was also the first time since the countdown began in 1993 that a cover claimed the top spot.

The Wiggles is one of Australia’s biggest, most profitable music exports.

Together the group has sold over 30 million albums and DVDs, eight million books globally, and accumulated over one billion streams.

ABC Music’s Basil Cook told TMN that the independent label is “unbelievably thrilled” to see The Wiggles get their first-ever ARIA #1 album.

“After a monstrous 30th-anniversary year in 2021, through to winning the Hottest 100 in January, and now this #1 Album with ReWiggled too, the band prove they still have so much to give and show no signs of slowing down anytime soon,” Cook said.

“We’re so happy with the amazing bands who covered The Wiggles on this album too.

“We couldn’t be happier for the entire cast and crew – the #1 feels very sweet indeed.”

“They really are the hardest working band in show business,” Cook said.

The Wiggles – who first signed with ABC Music in 1991 – is currently on tour, performing shows nationally and selling over 100,000+ tickets in the process.