Cultural change in music: How bad behaviour masquerades as culture 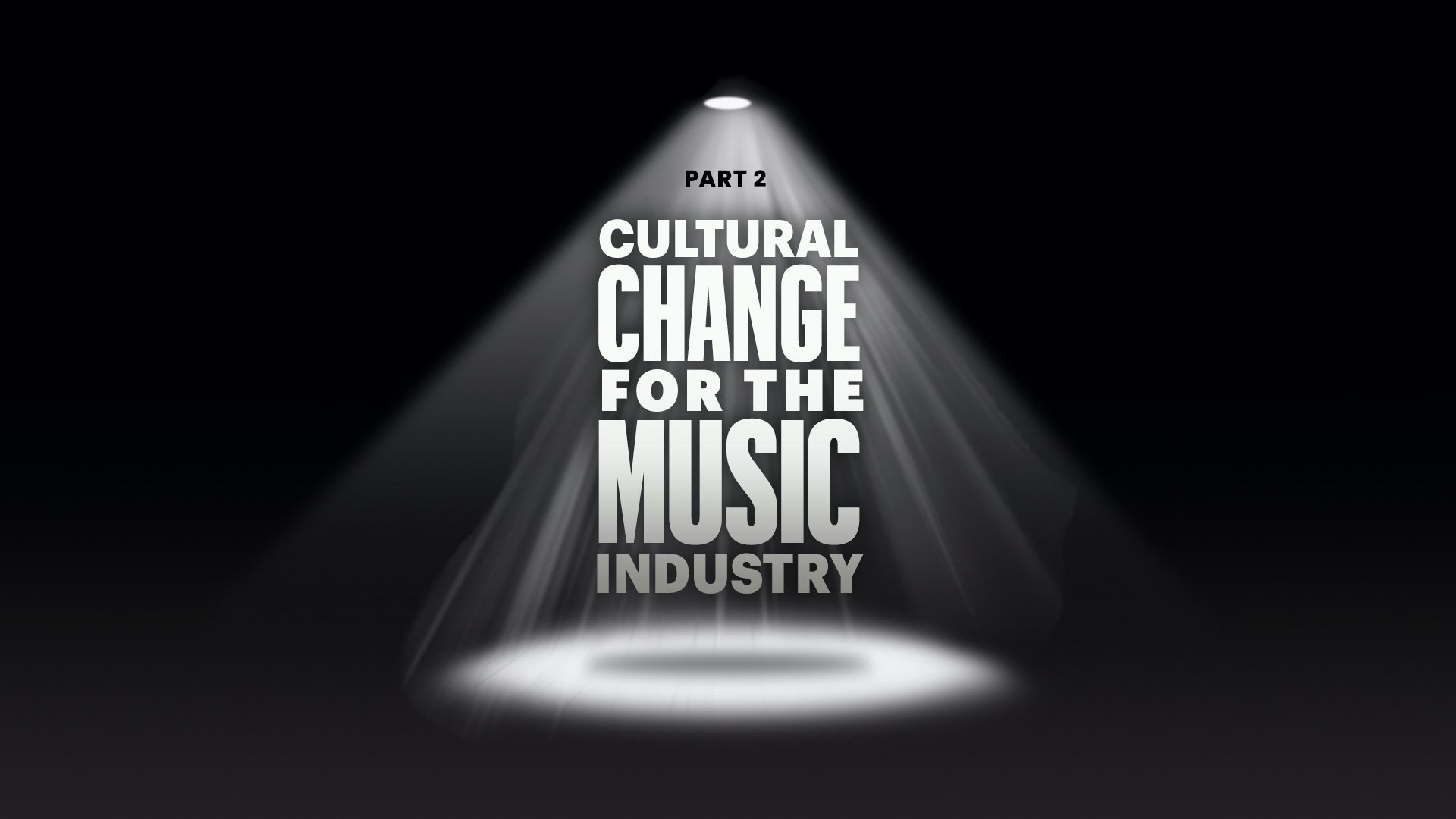 Putting the spotlight on culture change in the music industry

Last month, we published the first in our series exploring cultural change in the music industry, following the myriad issues that have surfaced about serious allegations and instances of sexual assault, workplace harassment, bullying, substance abuse, and mental health issues over many years.

In this article we explore brand, reputation, culture, and change, and the particular challenge the music industry now faces in bringing the executives in Manhattan boardrooms, established artists, talented newcomers, independent labels, streaming services, managers, super fans, and the wider community, along the same journey as abuse victims.

What these other industries and institutions had in common was that they were considered trusted institutions or, in the case of politics, at least institutions where the community had expectations for a certain standard of behaviour and conduct.

So, the fall from grace and damage to their reputation (in the short-term at least) was shocking and complete. This was because the brand these institutions represented in our hearts and minds was so at odds with the severity of the allegations and incidents uncovered.

A trust was broken.

In some regards, the music industry has a wholly different challenge ahead of it.

This has to do with the brand the industry itself has invested so much time, effort, and resources in cultivating over many years, and an army of lawyers to protect it.

Because when dominant aspects of the music industry have spent the best part of a century cultivating a hard living brand based on sex, drugs, and rock ‘n’ roll, how do you start dismantling the very reputation that has not only generated some of the greatest music of all time, but has also enabled seriously bad behaviour to masquerade as culture?

What is brand authenticity?

In a Forbes article on the need for brands to have an authentic connection with their customers, brand authenticity is described as, “…one that decides to be transparent and consistent in its messaging and branding initiatives. It has business values it remains true to, and most essentially, it is honest.” (Georgiou, M 2021).

When looking at the Four Corners piece on Sony Music and its former Chief Executive in Australia, Denis Handlin, arguably Sony and its CEO had brand authenticity in spades.

According to those interviewed who worked there at the time, this behaviour was nurtured and cultivated and its brand in the industry was based on the hard living, hedonistic, drug taking, tough talking, brutal, fickle, and unforgiving reputation its leader had actively pursued.

It was not inauthentic. It was not out of step with expectations. The words matched the actions. It was on brand, a winning formula. So, it was not challenged, or if it was, no one was listening. And people suffered.

To the wider community, hearing and reading these revelations caused more resignation than shock, more shame that this was once considered ‘ok’ rather than outrage, more sadness than a sense of a trust broken.

And herein lies the reputation challenge for the music industry.

This is not a case of repairing a broken reputation. There is no ongoing condemnation in mainstream media, no galvanising of the wider community online in solidarity with the industry. There has been some, and the work of organisations such as Beneath The Glass Ceiling are pushing, but there has not been the kind of widespread, sustained, public outrage that often – rightly or wrongly – becomes the catalyst for systemic change. Unfortunately, public reputational damage is often the initial motivator for executives to take note and institute widespread cultural change (or at least an attempt to be seen to be doing something to address it).

So, in the absence of this burning platform, what is the motivator for rebuilding the music industry’s brand reputation and culture from the inside out?

The answer lies in the power of self-reflection and empathy.

Music has a wonderful power to connect, to shine a light on issues, to disrupt, to shape culture, and to embrace all. It can create safe places of acceptance for artists, and it can offer this to its fans. It is also an industry that relies heavily on brand, image, and artifice, creating fantasy, illusion, and escapism. Rock gods, sex symbols, rebels, and poets are celebrated and idolised by adoring fans. That is the business model.

So, it is easy to see why some in the music industry may be reluctant to disrupt that. By challenging cultural norms and saying that certain behaviours are now no longer okay, doesn’t that sanitise the brand and break the business model? Isn’t this just cancel culture gone mad? Won’t this damage the rock ‘n’ roll image and impact creative expression? Won’t we just be accused of being wowsers and killjoys?

The simple answer to these questions is, no.

The more complicated response however is to explore where some of these concerns come from, understand them, acknowledge what might be driving them, honestly and bravely argue for why some change and self-reflection is necessary, and seek to address them through conversation and open dialogue.

To do this, let us first explore some of the unintended consequences of a brand reputation built on a mythology that has created idols and rock gods for some, but has been damaging, violent, disempowering, and hurtful for others.

Under the cover of culture, brand, and normalised behaviours, bullies, abusers and those able to exploit power dynamics have been enabled and allowed to flourish.

It may not have been the intention of the industry, but for those trying to speak out, recent examples speak to coercion, pressure, and threats of limited career growth or worse, termination of employment.

When you are aspiring to be part of an industry you love, to make music you care passionately for, to entertain crowds or to work with artists and recording studios, anything other than absolute compliance with the brand and lifestyle seems impossible. Brand rock ‘n’ roll creates an unattainable, unsustainable, but extremely alluring version of what it is to be a music legend. This is part of an artist’s image – their look, their back story, their stage presence, their antics, and exploits. It creates an allure and fans, and media contribute to the interest and appetite for more.

This myth extends to the idea that authenticity and artistry is somehow also tied to this image. But artists like Jimmy Barnes, Slash, and bands through documentaries such as Metallica’s Some Kind of Monster, ripped the lid off this, making clear that they were suffering greatly and needed help for mental health and drug addiction.

Posthumous documentaries about artists like Amy Whitehouse demonstrate the tragedy of relentlessly perpetuating this public image.

One of the unintended consequences for projecting a public image of debauchery and “good times” is how voices of victims and complaints are heard by the media and received by those on the outside.

The outcome is twofold – if everyone is made to believe that this behaviour is normalised and accepted, then convincing people that the behaviour is in fact dangerous and harmful is that much harder.

Media has in the past been complicit in perpetuating this by qualifying reporting or accompanying it with images or commentary that blames the victim. As a result, where there is a lack of public outcry and outrage in solidarity with victims, there is a danger that victims are not afforded timely and appropriate support.

Creating workplaces that make it okay to question, discuss, and explore ethical and appropriate behaviour is not mutually exclusive to creating a workplace that celebrates and embraces music culture. It will not harm its brand; it will just make it inclusive and safe for everyone to participate (Dollins and Stemmle, 2022).

The digital revolution that hit the music industry in the late 1990s and the invention of social media platforms in the early 2000s disrupted the business model that had dominated music culture for decades.

While it hit artists and the industry hard, it also democratised music and gave more power back to artists to reach their fans and bypass the machine that would otherwise control, create, and decide their career.

It also finally gave artists a forum and a platform to share their stories and for victims to speak about their trauma, no longer bound by the power dynamic that had silenced victims and normalised behaviour. It saw the rise of #metoo and the establishment of platforms like Beneath The Glass Ceiling, and victims found a community of supporters and survivors and an avenue to seek action against perpetrators.

On the other side, these same platforms that became a safe place have also become a place for bullying and victimisation, with misinformation and unchecked allegations spreading quickly. A recent Fairfax article, When Hugh Sheridan Got Cancelled, explores the dangers that social media can play in demonising people, damaging mental health, and destroying reputations and careers.

For many, social media is a powerful way to shed light on issues, as “sunlight is the best disinfectant.”  While it is true that it can shine a stark light on unacceptable behaviours, the type of complex, nuanced, sensitive, and meaningful discussions that need to follow should be had in workplaces and in forums that provide safety, justice, and structure for all.

What we know in any organisation or for any individual, is that reputation is the sum of how much perception and expectation match behaviour, words, and actions (Waller and Younger, 2017). The music industry can reset and change its brand narrative, to articulate its purpose and to shape its story as one of inclusion, creativity, safety, artistry, genius, and self-expression. Button, J, (2021), “When Hugh Sheridan Got Cancelled”, The Good Weekend, published in The Age and Sydney Morning Herald. November, 2021.

Waller, D and Younger, Rupert (2017), The Reputation Game: The Art of Changing How People See You.