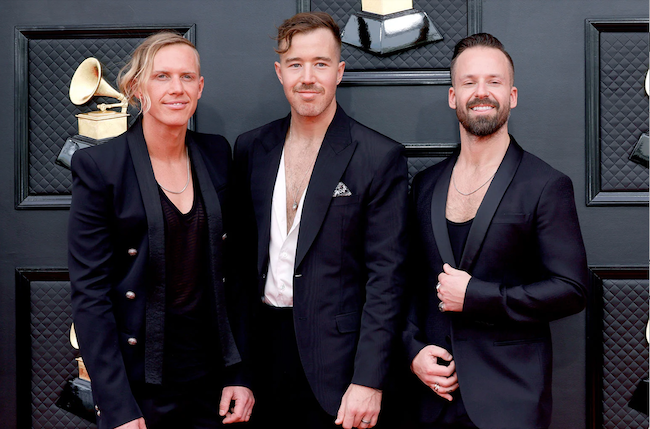 Rüfüs Du Sol leads the Australian contingent at the 2023 Grammy Awards, where the electronic trio could snag a brace of gilded gramophones.

Tyrone Lindqvist, Jon George and James Hunt broke their duck in April of this year, with a win in the best dance/electronic recording category, their third career nomination.

Next time, the Sydneysiders could go back-to-back in that category with “On My Knees,” boasting Aussie Cassian Stewart-Kasimba on mixing duties, and there’s a chance for best electronic album with Surrender, the EDM act’s fourth studio album and third leader on the ARIA Chart.

APRA AMCOS has studied for the form guide for the 65th Grammys, which is set to take place Feb. 5 in Los Angeles’ Crypto.com Arena.

Other members of the PRO in the mix for honours include London -based Jordan Rakei, a co-writer and featured performer on “Shadows” from Bonobo’s nominated LP Fragments, plus Styalz Fuego, a co-writer and co-producer on “Love Letter,” which appears on ODESZA’s The Last Goodbye.

Cub Sport’s Tim Nelson is feted for his engineering efforts on “Mine“, which also features the Brisbane pop outfit and assists from Cosmo’s Midnight (“How Does It Feel?”) and Golden Vessel (“Till It’s Even”).

Baz Luhrmann’s ELVIS is nominated for best compilation soundtrack for visual media, and recognition could go the way of PNAU, for their co-writer/production for their re-work of “Don’t Fly Away,” and Tame Impala’s Kevin Parker, for his contributions to the “Edge of Reality (Tame Impala Remix).”

Also, keep an eye out for Aotearoa’s Frano Huett, who contributed production and co-writes on “Rich Spirit” from album of the year and best rap album nominee, Kendrick Lamar’s Mr. Morale & The Big Steppers.

Lamar is expected to leave the Grammys with his hands full. The Los Angeles rapper scoops eight nominations, behind just Beyoncé, with nine.

Australian Grammy wins are hard to come by. Late opera great and ARIA Hall of Famer Joan Sutherland was the first Aussie to win a Grammy, back in 1961.

Since then, the Bee Gees, the late Olivia Newton-John and Keith Urban have won multiple trophies, while the likes of AC/DC, Men At Work, Gotye, Helen Reddy, Rick Springfield, M-Phazes, Wolfmother, Hugh Jackman, and Flume have waved the flag.