Is AI-generated music worth anything? Public recognition of AI-generated music as viable art has gradually expanded from the confines of esoteric research centers and experimental composers into the commercial, playlistable, VC-funded mainstream.

But amidst all the hype, fear, skepticism and capital around AI-generated music, there’s still very little conversation about a core piece of information that any successful business should have: market value.

We’ve heard the types of songs that creative algorithms can output today, and we know how they can improve—but how much is AI-generated music actually worth?

I can imagine some people dodging this question by arguing that “the technology isn’t there.” But that doesn’t mean the question is irrelevant, since market activity will prevail regardless of how “good” the tech is.

In this regard, the visual-arts world is now far ahead of music. OnOctober 25, Christie’s auctioned off its first-ever AI-generated visual artwork for a total closing price of $432,000—43.2 times higher than Christie’s maximum presale estimate of just $10,000.

The artwork in question was created by an AI using generative adversarial networks (GANs), which Paris-based art collective Obvious trained using a set of 15,000 portraits painted between the 14th and 20th centuries. The AI outputted a series of portraits of the “fictional Belamy family,” one of which was auctioned off at Christie’s and even “signed” with a not-so-user-friendly GAN loss function on the bottom right (pictured below). 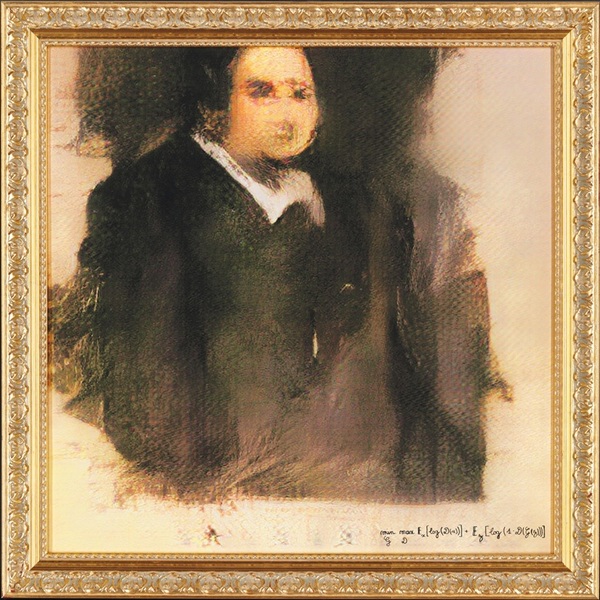 In a followup analysis of the auction, computer science professor Ahmed Elgammal argued that the rise of AI-generated art as a practice is actually not a novelty at all, but rather is a natural extension of the decades-old art movement of Conceptualism, which values planning and production processes as equally as, if not more highly than, the end result.

“The art is not just in the outcome,” writes Elgammal, but also “in the process that leads to that, including the curated [training] dataset, the choice of the algorithm and its parameters, and the post-curation [of finished works].”

We certainly see that emphasis on process over product in nearly all the media’s coverage of the auction to date. In other words, there’s a much greater public emphasis on, and fascination with, the underlying algorithm as the artwork’s defining merit, rather than any surface-level features of the public-facing portrait itself.

19-year-old AI artist Robbie Barrat, who wrote much of the original code that Obvious borrowed to generate their Belamy portraits, puts it a bit more cynically: “No one in the AI and art sphere really considers them to be artists. They’re more like marketers.”

What happened at Christie’s last week carries valuable lessons and signals for the future of AI-generated music, and in how its engineers, managers, labels, publishers, booking agents, etc. will value, market and profit from this music in the future.

Of course, the visual arts and music businesses are quite different from each other. Fine art still benefits from a sense of Instagrammable spectacle, exclusivity and scarcity (even if, in the case of algorithmic art, that scarcity is literally manufactured), which then drives up the value of its core product, namely the artwork.

In contrast, there is a wide perception that streaming and digitisation have not only driven down the value of music, but have also inextricably complicated the concept of a song’s “market value” altogether. After all, digital music is increasingly like an information good: a stream is the new sale, at least on the charts, and affordable (if not free) access has replaced ownership as the primary consumer demand.

Scarcity does still exist in some form in the music business, especially in relation to legacy artist estates and catalogs. The legacy songwriter catalog market is steadily heating up with multimillion-dollar acquisitions, while rare vinyl records still sell for several thousand dollars on sites like eBay and Discogs.

But many investors see the benefit of AI-generated music as further fostering a “post-scarcity” economy—joining other automation technologies (self-driving transportation, robotics, search, marketing) in drastically lowering certain production and process costs, with the music business as its primary petri dish.

The worst-case scenario is that AI becomes sufficiently “independent” creatively such that it can churn out hundreds of songs in a day, register the proper copyrights for those songs and then flood platforms like Spotify and SoundCloud, which would make the online music landscape even noisier and more unnavigable than it already is today. And then the answer to “how much would you pay for an AI-generated song?” would probably be, well, nothing.

However, if we examine the AI-generated music that’s actually gaining significant, consumer-facing traction and market activity today, it’s not about “flooding the market” at all, and fans aren’t buying into AI musicians for any reason to do with “lowering costs” or cheapening production. In fact, just as with the visual art world, entrepreneurs and marketers are trying to use AI musicians as a vehicle to elevate worth and value by gifting those artificial musicians with more human-like personalities, and hence an illusion of brand scarcity (without the backend costs involved).

To explain further, let’s look at some recent developments in commercial AI-generated music and its closest siblings—e.g. CGI social-media personalities, hologram tours—and examine the scope and source of their market value based on publicly-available data: 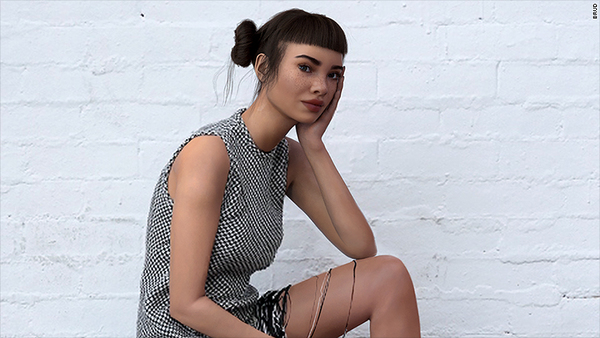 Lil Miquela, a CGI Instagram influencer with over 1.5 million followers, released her latest single ‘Hate Me‘, a collaboration with EDM producer Baauer, in August 2018. As of this newsletter, the track has been streamed over 3.8 million times on Spotify, and even got its own billboard in NYC’s Times Square.

Miquela’s 2017 summer single, “Not Mine,” has racked up around 1.7 million streams so far. Beyond music, Miquela has also done several fashion-oriented magazine covers and brand partnerships with companies like Vogue, Prada, Ugg and Opening Ceremony.

Someone recently told me that major labels had the chance to sign Miquela a few years ago, but dismissed the opportunity because they thought it was rather frivolous and pointless at the time.

Their most popular single, the gibberish-sounding ‘Magic Man,’ has over 3.4 million streams on Spotify; next up is ‘Hello Shadow’ (ft. Kiesza), which has 2.6 million streams.

The creative process with SKYGGE is actually quite similar to how Obvious made its Belamy paintings: an AI ingests hundreds to thousands of songs of a particular genre (e.g. ‘80s French disco), and outputs melodies and chord progressions that it thinks fit the genre “best.” Human composers and artists like Perrier and Kiesza then evaluate, curate, interpret and perform those results.

The late Roy Orbison’s “hologram” (which is not actually a hologram, but rather a non-interactive laser video projection) has been touring the U.S. and Europe this year, “performing” some of Orbison’s classics with local live orchestras.

Ticket prices in New York range from $49 to $99, and in Los Angeles from $39 to $79—a relatively expensive price point, but typical for any legacy artist, alive or dead. The production company behind the tour, BASE Hologram, is also planning tours with holograms of Amy Winehouse and Maria Callas, all with permission of those artists’ estates. (If you’re interested in reading more, I interviewed execs from Base Hologram, Orbison’s estate and Paradigm Talent Agency for Billboard back in January.)

What do all three of these examples have in common? They all involve companies and technologists imbuing virtual musicians with an illusory sense of human identity, memory and/or experience—something that a typical standalone AI cannot possess as of now, since it’s only working with a limited set of rules and rewards.

Several months ago, I argued in a Billboard piece that AI-generated music could only compete meaningfully with purely “human” artists in a commercial setting if the former had this type of identity-driven backstory behind them: The claim that “AI will replace artists” assumes that we prescribe value only to songs themselves, when in reality musicians are so respected because they are arbiters of culture and context, not just of sound … the people who help promote and develop artists (labels, distributors, managers, concert promoters, agents, etc.) are also selling the artists’ backstories—personal histories, cultural and political upbringings, individual passions, etc.—as much as they are selling the musical works.

Until we can have an AI tell stories about itself and the music it writes, and until music companies feel comfortable promoting such “AI-generated backstories,” human artists will still end up at the top and have the last creative word.

Visual artist Stephanie Dinkins reiterated this point in a recent profile in WIRED, which argued in favor of giving robots an identity. “In order to work with the technology,” said Dinkins, “you have to be able to see yourself in it.”

So, how much are people really willing to pay for AI-generated music? As with any other human artist working in the music industry today, it depends on their marketability.

Yes, you can currently download AI-generated tracks from sites like Jukedeck for no cost at all. But people are also willing to pay at least five figures per week to get Miquela an ad spot in Times Square; with hologram tours, up to $99 plus fees for a concert ticket to see a virtual artist in person.

The increasing commercial viability of AI-generated music may only further exacerbate a shift that I think has already been happening in the mainstream music business for years: namely, displacing value and enthusiasm away from the uniqueness (or lack thereof) of the song, and instead towards the more intangible scarcity of the brand. Process over product, marketing over art.