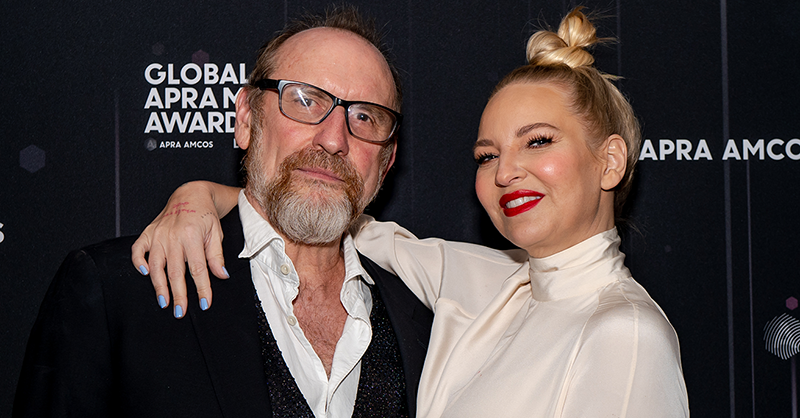 All roads lead to Los Angeles, especially for “the gumleaf mafia”.

At the opening ceremony APRA chair Jenny Morris acclaimed “the brave and bold” steps of writers who “had the fortitude and the drive, and the talent to come this far, to this scary place… to scratch an itch.”

Interestingly, their respective journeys began pretty much on whims.

Sarah Aarons was in hospital in Melbourne suffering from an autoimmune disease that left her tired when she decided it was time to focus on her writing and move to the US.

Grace Shaw was a high school student in Brisbane planning to go to university when at an Allday concert she got the premonition that she would be at airports with him.

Translating this as a sign she’d be touring with him, she became Mallrat and began writing.

Colin Hay’s parents ran a music store in Scotland in the 1960s, and after he got to hear The Kinks’ ‘You Really Got Me’ on the very morning it was released, he was hooked into writing his own tunes.

Growing up in New Zealand, Joel Little was mad about the Southern California punk scene.

When he went to see them on a Warped tour, he realised they weren’t that good live, and he could form his own band (Goodnight Nurse) and do better.

That eventually turned out to be a successful career as songwriter and producer for the likes of Lorde, Taylor Swift, Jonas Brothers, Imagine Dragons, Khalid and Tove Lo.

These four were just some whose achievements were celebrated in Los Angeles. Sia also made a rare appearance at the awards ceremony to present family friend Colin Hay with the Distinguished Services Award.

Her father played together with Hay way back then, and Sia recalled how “Uncle Collie” had taken her to the Grammys as a 13-year old.

Hay, who got a standing ovation, said in his characteristically self-deprecating manner that he wasn’t sure how distinguished his services were.

“But I don’t think you can overstate the importance of being of service. I think creating music is a beautiful service that helps bind the connective tissue of humanity.”

Now a US resident, Hay is best known for time spent with Men At Work.

But his career since has stretched his creativity to writing for films and TV, solo albums, acting, touring regularly with Ringo Starr and narrating an audiobook of Aesop Fables.

He began a three-month US tour the day after the awards.

The evening was hosted by Maya Jupiter and featured an opening performance by Wafia, who performed ‘Young Dumb & Broke’ by Khalid, co-written and produced by Joel Little. Kimbra closed the evening with ‘I Just Don’t Think I’ll Ever Get Over You,’ originally performed and written by Colin Hay.

LA-based honorees of The 1,000,000,000 List, who scored over a billion streams for an original song were also recognised.

These included Georgi Kay (for ‘In My Mind’), Leroy Clampitt (for Justin Bieber’s ‘Company’), Dann Hume (for Wiz Khalifa ft. Charlie Puth’s ‘See You Again’), Sarah Aarons (for ‘The Middle’) and Joel Little (for ‘Royals,’ ‘Young Dumb & Broke’ and ‘Whatever It Takes’).