Boys To Men: The evolution of 5 Seconds Of Summer 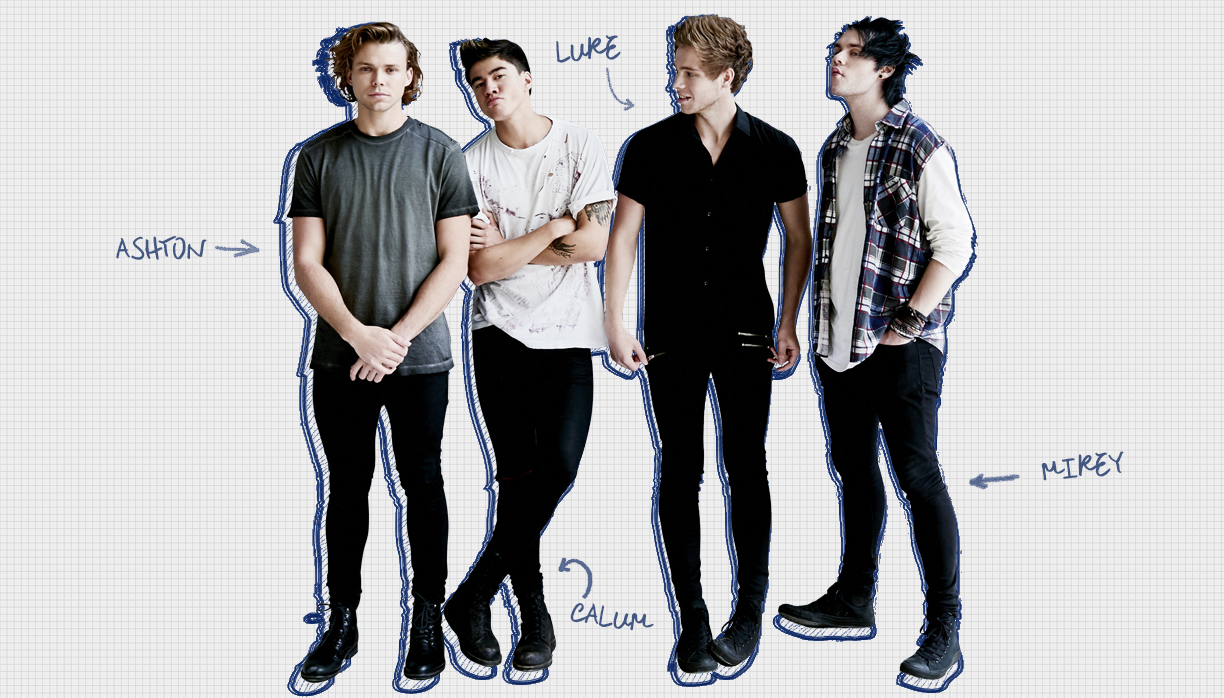 5 Seconds Of Summer have tread a path that few have successfully managed, building themselves from pop-punk teen heroes to a genuine pop force in the space of just five years.

From ‘She Looks So Perfect’ to their latest release ‘Easier’, they are almost unrecognisable. Gone are the raucous, rock-ready teens. The Australian group are now a slick, mature pop act with the chart success and superstar team to prove it.

A lot has changed since the band debuted back in 2014. For one, American Apparel – the brand namechecked in their breakthrough song – is no longer existent, One Direction is on a hiatus that is looking like it could be permanent and 5SOS have ascended to the throne of the biggest boy band in the world.

It’s not something they could’ve done by sticking to a blueprint they successfully laid out five years ago. The band has cleverly transformed themselves from flannelette-wearing teens to leather jacket-clad men with sleek pop songs to boot.

5SOS’ 2014 debut was a runaway hit. Lead single ‘She Looks So Perfect’ was a cheeky, heart-flutter co-penned by group members Ashton Irwin and Michael Clifford alongside Jake Sinclair who had also contributed to songs for Fall Out Boy and Panic! At The Disco.

The song shot to #1 in Australia and landed them their first top 30 hit in the US.

Second single ‘Don’t Stop’ came hot off the heels offering a similar formula. Australia was in love, sending it straight into the Top 5 and it also earned them their second Top 50 in the US.

It’s almost unprecedented for an Australian band to crack the US so early on but their die-hard fanbase was unstoppable from early on.

An album, almost entirely produced by Panic! and Good Charlotte producer John Feldmann, followed soon after and immediately hit #1 in Australia, the US and the UK. Against all odds, the third song from the record Amnesia, showing a distinctively softer side to the boys, became their highest charting single in the US.

The album was another global #1 but it failed to produce a song as sticky as ‘She Looks So Perfect’ or ‘Amnesia’ even though lead-single ‘She’s Kinda Hot’ was a playful, tongue-in-cheek hit.

At this time it looked like 5SOS may never be able to repeat the success of their debut. That’s not to discredit the songs, but the boys were growing up and outgrowing their sound.

When you look at young pop-punk bands from the past, few have been able to do what 5SOS have done.

Fall Out Boy have come the closest, successfully crossing over from cult heroes into mainstream giants, peaking commercially with 2007’s Infinity On Hight. Simple Plan made big moves early on but ultimately failed to crossover once they crossed over into pop.

Panic! At The Disco, on the other hand, have taken 12 years to find a steadfast place on pop radio following their debut. ‘High Hopes’ was their biggest hit to date and it came with just one of the original band members – Brendon Urie.

It took 5SOS three years – a lifetime in pop music – to land on their third album Youngblood. They introduced the LP to us with ‘Want You Back’, a mature, slender pop song co-penned alongside Steve Mac (Ed Sheeran’s ‘Shape Of You’). The band had delivered a sound that reflected their age and naturally morphed them from punk teens to adults with genuine pop star potential.

The first single felt like an entry point to their sucker punch of a hit – ‘Youngblood’. The title track of the third album was not only a gigantic pop song but a stadium-ready rock song. The verses are tender, filled with Luke Hemming’s falsetto but the chorus crunches down with widescreen guitars that told us in no uncertain terms that 5SOS were still a band even if pop had become the mode.

The stats speak for themselves. Locally, the song was the highest selling single of the year marking the first time a local act had achieved that since 2005. Stateside, it became their first Top 10 single and also their first Top 10 on the pop radio airplay charts.

The band were cleverly paired with Julia Michaels for the third single ‘Lie To Me’, introducing us to an even tenderer side of the band. They had never been featured alongside anybody before and Michael’s always-emotional voice brought a depth to the song that the boys just wouldn’t have been able to match five years ago.

Following a huge world tour, the Youngblood album cycle looked to be over but the band clearly weren’t ready to stop their hot run. With ‘Youngblood’ still sizzling away at radio both here and in the US, they made their first foray into EDM, teaming up with The Chainsmokers for ‘Who Do You Love’.

The US duo had been leaning into darker material and so the collaboration felt like both acts were meeting in the middle.

Now, with the success of their album still buoying their confidence, the band have unleashed their biggest pop moment yet with ‘Easier’.

The song was co-written by Charlie Puth and Ryan Tedder who are both no strangers to penning a hit. It’s dark but it may be their most pop-centred release yet, a move that shows they’re coming for stadium-ready success.

If ‘Easier’ is anything to go by, we’re not going to be waiting as long for album three as album four.

5SOS have momentum and some of the biggest songwriters and producers in the world at their disposal. They’ve surprised everyone with the grown-up, pop album and now they have an identity that’s almost sure to outlast the teen band image.

The song was Most Added to Australian radio last week, and while US radio typically takes longer to gravitate to a hit song, ‘Easier’ has the legs (and sound) to make it worldwide.