In 2003, the fear that music piracy could derail the entire music industry was a very real one, and Madonna duped everyone by once releasing a fake version of her own album.

Two years earlier, Metallica had won a landmark court case against Napster, but – just as clearing drug dealers from street corners only results in other dealers swooping into the territory – Napster’s position had simply been taken up by a host of other peer-to-peer file sharing services, all of which were less traceable and more flagrantly unregulated than Napster.

Rather than take the legal route, Madonna decided to fight fire with fire, uploading a fake ‘leaked’ version of her American Life album to file sharing service KaZaA – best known for their flagrant disregard for laws and title case conventions, and for being a word you hadn’t thought about for a decade.

Madonna uploaded a version of her album with the correct titles, but upon downloading every song, listeners were greeted with a loop of her saying, “What the fuck do you think you’re doing?” Pretty funny, pretty petty, pretty awesome.

But, as Shakespeare once said: “Don’t be playing a player, fool.”

A hacker from Phrack Magazine didn’t like this gall, and responded in kind, hacking her own website, and writing, “This is what the fuck I think I’m doing…”, posting download links to the actual leaked album, plus radio remixes, club mixes, her 1994 Bedroom Stories album (why not?) and a rather touching, if mistimed marriage proposal to one Morgan Webb. 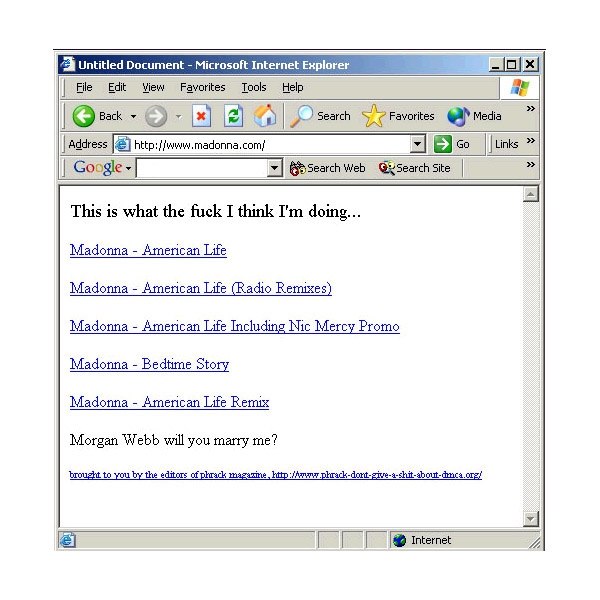 The leak didn’t harm her chart position, with the record hitting #1 in America, selling 241,000 copies in its first week. The drop off from previous album Music was notable though, with the latter selling 420,000 first week. Whether it was a result of the leak, or a sign of the times is unclear.