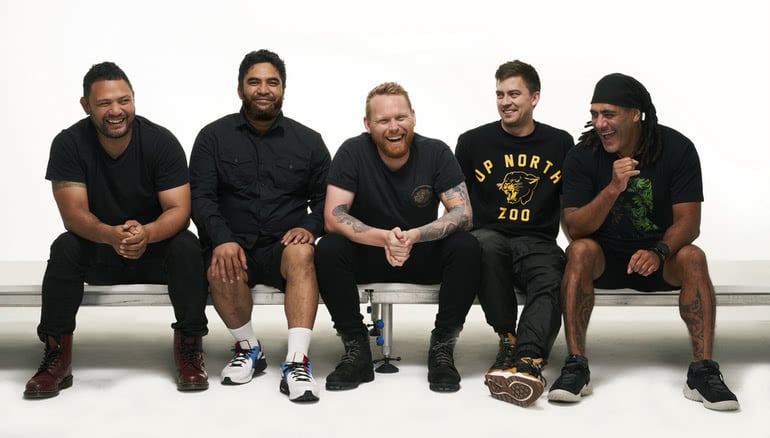 L.A.B bag a few pieces of chart history in the Land of the Long White Cloud, just days out from a new album release.

For the second time in their career, the funk-rock act hit No. 1 on the Official NZ Top 40 Chart over the weekend, with the latest single ‘Why Oh Why’ debuting at the summit.

The prolific Kiwi act’s ‘In The Air’ ruled the chart back in February and currently sits at No. 2, marking the first time a local artist has held No. 1 and 2 at the same time.

No other homegrown act has held three spots in the top five, until this week.

‘Controller’ is flanked by two U.S. releases on the Official NZ Top 40 Chart: 24kGoldn’s ‘Mood’ featuring Iann Dior at No. 3, and Ariana Grande’s ‘Positions’ at No. 5.

While the rest of us are ruing 2020, L.A.B. have done just fine. They’re only the second local independent artist to ever achieve two No. 1s in a calendar year.

Watch L.A.B perform ‘In The Air’ at Roundhead Studios:

L.A.B are household names in their homeland, where they took out Best Roots Artist and the People’s Choice at the 2020 Aotearoa Music Awards.

Next March, the five piece — Ara Adams-Tamatea (bass), Miharo Gregory (keys), Brad Kora (drums, vocals), Stu Kora (keys, vocals) and Joel Shadbolt (guitar, vocals) — is locked in for an Auckland headline concert at Mt Smart Stadium, for what will be their biggest outdoor show to date.

An Australian tour announced earlier this year sold 15,000 tickets in just two weeks. Though, due to COVID, those dates have been pushed back to April 2021.

Their first leader ‘In The Air’ took flight on radio, and was the first NZ-originated No. 1 single since 2012, when “retired sex symbols” Flight of The Conchords hit the summit with ‘Feel Inside (And Stuff Like That)’.

All of which bodes well for the new album release L.A.B IV, the band’s fourth in as many years.

Due out Friday (18th December) through LOOP / AWAL, its 12 tracks are said to showcase the group’s own brand of melded reggae, funk, soul and blues.