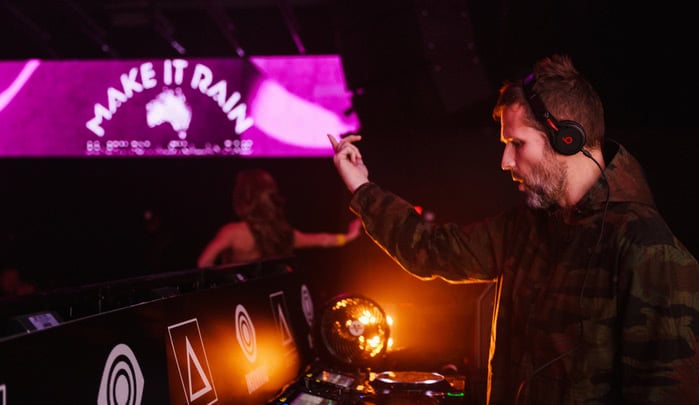 ‘Make It Rain’ has rained cash for good causes.

A special Los Angeles fundraising concert featuring a line-up of top-shelf DJs from Australia and North America last week raised more than A$125,000 (US$85,000) for Australian bushfire relief.

Superstar U.S. DJ and producer Kaskade tweeted at around 5pm on the day, revealing he was joining the party. Sales “went gangbusters,” organisers say.

On the night, Kaskade played alongside Hook N Sling, Don Diablo stepped up to the decks as the “surprise special guest,” and What So Not brought out a bunch of famous friends, including Peking Duk and Canadian turntablist A-Trak.

Like many thousands of Aussies playing their trade abroad, Padman, Allan and Leon were horrified by the images of wild fires destroying their homeland over recent months. Music so often strikes the right note in difficult times.

“The feeling of complete helplessness got too much for us here in L.A., and we knew we needed to channel our energy into something bigger than ourselves,” the trio said in a joint statement ahead of the show.”

The dance music community “has been so supportive of this cause,” they say of the concert, which played out under the stapline “Aussies and Americans unite to lift up Down Under.” ‘Make it Rain’ has made a big splash with Spotify. For a seven-day stretch, the streaming giant has flipped its popular ‘Mint’ playlist into an Aussie takeover with 32 tracks from homegrown acts, including everyone from last Wednesday’s bill.

“It was an event born from our deep desire to contribute remotely from L.A.” say Padman and Co., “and it felt so rewarding to lean on our networks for such an amazing cause.”

All profits from the show go to charity, with $A40,000 donated to each of NSW Wildlife Council, Australian Red Cross, and GivIt, which rebuilds communities.