It took a year of lobbying, needling, open-letters and meetings, but the federal government finally got the message.

Early Thursday, the country’s leaders issued a statement confirming $125 million in new RISE funding and an additional $10 million for Support Act from the Australian Government.

With the JobKeeper cliff fast approaching, it was nail-biting stuff.

The lifeline was widely welcomed as a short-term solution, an extended safety net which should help the music industry as it finds its feet in the months ahead.

And it comes after reps from APRA AMCOS, Live Performance Australia, Association of Artist Managers and the Live Entertainment Industry Forum met with the nation’s leaders in Canberra for an eleventh-hour round of talks. 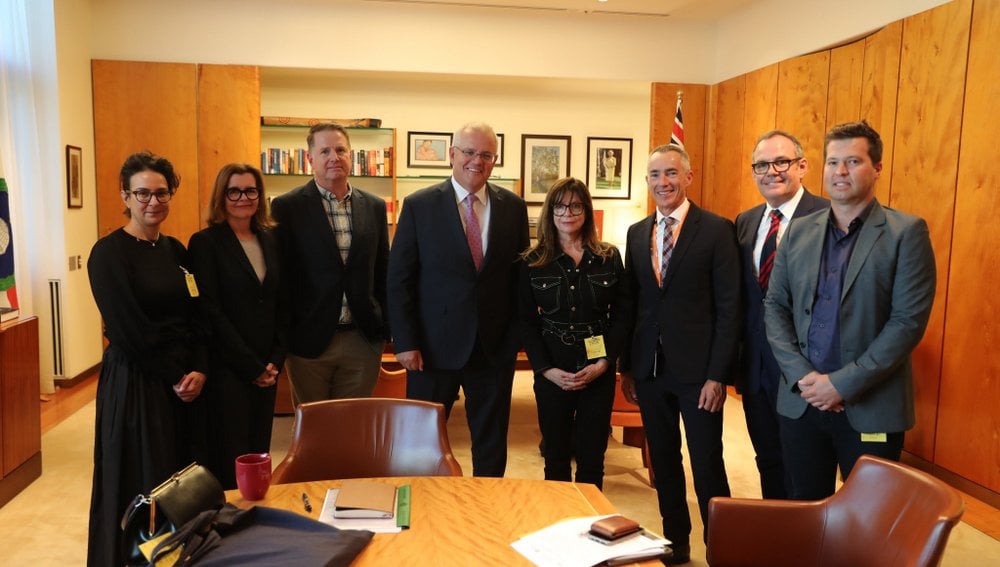 The package is a reaction, but not the solution, to the downward pressures that have ruined the live economy.

An immediate return to full-scale business, with no capacities on venues and open borders, is the correct answer.

In the meantime, the music industry has largely applauded the package and called for more planning, and a structured response at state and territory level.

Read some of the reaction below. “Our focus has turned to stimulating activity so the work opportunities can flow. This new funding comes at an important stage in the resurgence of Australia’s arts and entertainment sector. The purpose of the RISE program is to get shows put on, bringing employment to performers, crews and front-of-house staff.”

We’re getting the arts industry back on stage 🎭

Today Treasurer @JoshFrydenberg and I have announced an extra $125 million for the Morrison Government’s successful RISE Fund, bringing total investment in the program to $200 million.

“Many of us have struggled to get back on our feet due to the ongoing regulations and restrictions on live performance, and this announcement is a welcome relief. We now need a commitment to see that this money goes to the people, the small businesses – artists, managers, agents, road crew and more that need it most.”

“Support Act is very pleased that the Australian Government has recognised the special challenges live entertainment workers will continue to face over the next six months as JobKeeper ends but restrictions on standing capacity in venues and border uncertainties remain. While RISE grants will eventually provide relief to many, Support Act recognises that such funds are unlikely to reach those worst affected by the end of JobKeeper before mid-year.”

“We are grateful to the government for this significant support of live music, particularly via the expanded scope of the RISE guidelines. We look forward to further consultation with government in regard to these guidelines to help ensure that these badly needed funds make it to the coalface of our industry as soon as possible”.

“This package recognises the unique place of live music and entertainment industry artists, workers and businesses as the sector struggles to restart under the weight of government restrictions and sudden border closures. We urge the Australian Government to expedite the application process so these funds can be distributed to the industry urgently. The livelihoods of thousands will rely on this new package to ensure the sustainability of our sector…The reduction of the threshold of grant applications from $75,000 to $25,000 will also hopefully provide more direct support to emerging artist tours and events.”

Thank-you to the Prime Minister @ScottMorrisonMP, Treasurer @JoshFrydenberg and Minister for the Arts @PaulFletcherMP for recognising the importance of the Music & Entertainment industries, hearing us, and supporting at this critical time! https://t.co/3NiuMTJADz

“We commend the Federal Government wholeheartedly for this package and its recognition that our industry just wants to get back to business. The Government’s boost to the RISE funding will play an important role in enabling us to do that, along with its welcome boost to Support Act to help some of the most vulnerable people in our industry through what continues to be an extremely challenging time. Our next step is to work with The Federal Government, State & Territory Governments and National Cabinet to enable Australia to lead the world in live entertainment…We look forward to working with the government to get this money out the door as quickly as possible. This investment by government will help us keep companies alive, projects moving and people in jobs.”

“Extending the scope of the RISE program will provide a targeted and temporary measure for the sector to retain its core skills base as it prepares for full reactivation in Q4 onwards. In addition to music promoters and festivals, this will encourage more direct applications from micro-businesses such as managers and booking agents for contemporary music tours and events.

–Geoff Jones, CEO of TEG and Co-Chair of LEIF

“Whilst Save Our Scene welcomed the federal government’s RISE funding announcement yesterday, these competitive project grants are primarily targeted at festivals, concerts, tours and productions, and address project funding rather than assisting with music venues to cover core costs while they continue operate at 30% of regular capacity…Our music venues can not survive without Victorian Government intervention.”

–Save Our Scene Victoria

“This new package comes at a time of dire need for the live music sector, which has suffered unprecedented loss from COVID-19 shutdowns and uncertainty for the past twelve months. Live music was one of the first sectors to be shut down and is still operating at well below capacity… Today’s announcement means there is continued financial and other support for those in the industry that have been hit hardest and we support that 100%.”

“We welcome the package announced today and commend the Federal Government for giving the industry the time to make its case. Our next step is to work with all Governments to enable 100% venue capacities, bring leading international touring artists into the country and enable them and domestic artists to plan national tours so we can plot a path back to growth that benefits the Australian economy, and the wellbeing of the Australian public, which loves live entertainment.”