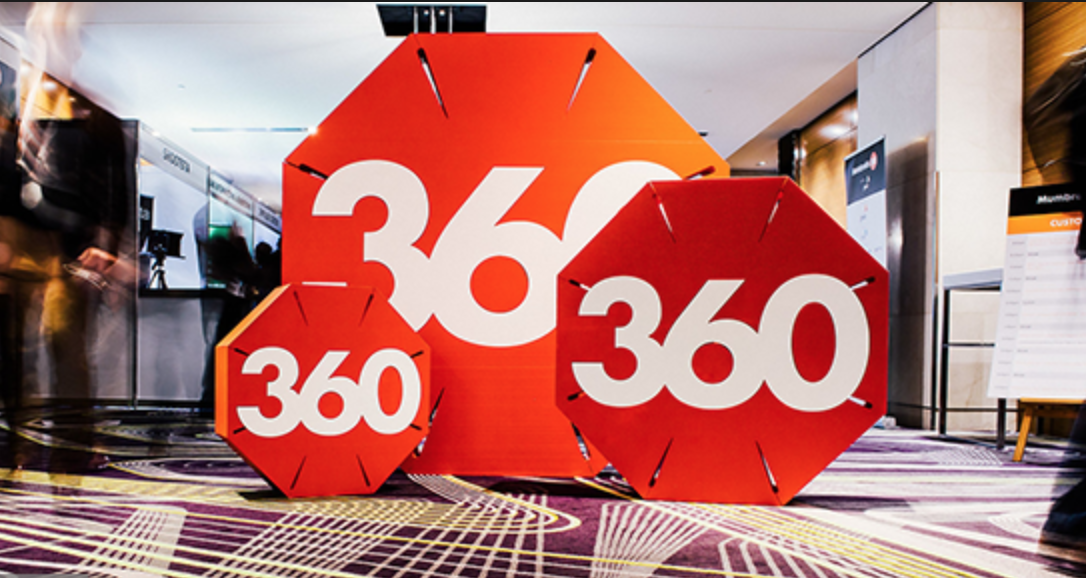 Mumbrella360 is the largest media and marketing conference in Australia, attended by international CEOs and CMOs, agency figureheads and media bigwigs converging to address the challenges and innovations of the workforces moving forward.

Taking up four floors of the Hilton in Sydney, attendees engage in multiple networking opportunities, workshops, panels, debates and exhibition areas, at $2499+GST per pass.

With the standard rock’n’roll uniform of jeans, boots and a T-shirt abandoned in favour of the only pencil skirt and pair of heels that I own, I went undercover as an important CEO-type media mogul and got the scoop on the latest audience, media and marketing trends.

Thankfully, are not there to speak about the experience of having ovaries and working in media.

The panel discussed the idea of juggling social media’s many “mouths to feed”, and the difficulties facing presenters who already over-share about their lives on-air to remain “authentic” to audiences.

Fifi Box revealed her experience of becoming the focus of magazine attention: “Anything I said was blown up.

“I’ve been pregnant 43 times – it’s not a joke, we actually counted!” she illustrated.

“I felt myself withdrawing and pulling back, and I hated that… I started to pull back because social media was too many mouths to feed.”

Keller mused that “Our careers happened before there was any ‘brand awareness,’” questioning whether influencers will become the “radio of the future”, bringing their personal brand with them to the station as opposed to the station creating a brand for each presenter.

Dunleavy says that she uses social media as a tool preparing for work, “I look at it constantly, seeing what people are doing in order to read the mood… see what people are thinking and feeling.”

They all agree that direct contact with fans is incredibly difficult, “how do you have time to get back to that person?” and that prioritising their energy is key to balancing work and home life without the cross-over into family time which social media threatens.

“I think that’s a bigger reflection of where we all are in the media. You wake up one day, your kids are grown up and you’ve missed life because you were on your phone,” said Ritchie.

Rethinking Female Brand Archetypes questioned the philosophy of Carl Jung, who created 12 characters – archetypes – based on the unconscious beliefs that reside in society.

Milica Djurovic and Sarah May of 303 MullenLowe explained the reimagining of the Jungian archetypes that could be adopted by advertisers and media to create change.

The need to update the archetypes we use in media and marketing stretches beyond the perpetuation of gender stereotypes and the harm they create – it’s a business move.

Offensive and gendered stereotypes in marketing turn away audiences. Women, especially, are switching off.

May tells us that 9/10 women find advertising efforts which target women to be “downright cringey”.

66% of women have actively switched off TV, movies and ads if they were negative stereotypes.

Specifically, in music, we should be questioning the way our representations affect our audiences.

Or ads for drums and guitars more frequently depict men, and festival and event after movies which show predominantly caucasian 20-somethings with model good looks.

Our audiences are incredibly diverse – why present them with outdated and insulting stereotypes they don’t relate to?

Junkee’s address was characterised by bright lights, fast-paced presentations, loud noises and a lot of swearing to keep us on our toes for the graveyard shift.

They took the audience through their key findings from The Truth & Share research project conducted by Pollinate Research for Junkee Media, looking into the interests and behaviours of Gen Y and Z.

This year’s findings are based on 2,325 respondents to a 25-minute survey.

What do youth audiences give a shit about? Who do they trust? Have we reached peak social? What do they watch? How can brands connect with them?

Ackland explained Junkee’s give-a-shit-ometer, which scaled which topics youth audiences ‘give a shit about’.

Tim Duggan explained a correlation between the ethics and integrity of a business and an increase in millennials’ trust in the brand; the importance of these qualities in brands has risen from 40% to 55% over the last five years.

For example: Qantas ranked highest of the youth-trusted airlines, with Ackland citing Qantas CEO Alan Joyce’s vocalisation of his support for marriage equality benefiting the brand’s reputation among millennials.

He said that tapping into the interests uncovered by the survey has massively increased the popularity and trust of Junkee media content; they had three million views on over 100 pieces of content in the last 12 months that focused on marriage equality.

They’re attributing this to a greater click-through rate on website posts to their socials as a direct result of the trusted nature of their social-first content.

According to their survey, 66% of youth audiences are going out less than they were a year ago.

If you compare that to the massive uptake of streaming and on-demand services, coupled with gig economy services such as Deliveroo, we’re looking at a youth population defined by JOMO – Joy of missing out – rather than FOMO.